Rebeca Rodrigues de Andrade is a Brazilian gymnast and two-time Olympian. Andrade perhaps possesses the best Cheng vault in the world, a vault very few gymnasts (such as Simone Biles) would even attempt in competition. Her incredible vault rocketed her to the Olympic gold medal in Tokyo 2020, making her the first ever Brazilian woman to win the gold in artistic gymnastics.

Andrade is a true all-around gymnast. Powerful on the vault, floor, beam, and bars, she exudes effortless grace and beautiful technique.

A little girl with big dreams

Rebeca Andrade was born on May 8th, 1999 in Guarulhos, Brazil, a city just slightly outside of Sao Paulo. She started gymnastics at the young age of four, when her aunt took her to the gym she worked out at. Andrade found inspiration in Daiane dos Santos, the 2003 World Champion on floor exercise - and she wanted to follow in her footsteps.

But dreams didn’t come easily to Rebeca Andrade. As one of eight children to a single mother, times were hard. Her mother cleaned houses and walked to work in order to pay for Rebeca’s gymnastics lessons. Rebeca herself often walked to the gym, as her mother didn’t even have enough money for her to take public transportation.

Though money was tight, Rebeca was determined. She would do whatever it took to master her art and make Brazil proud.

As a junior gymnast, Rebeca was exceptionally impressive. By 2014, she was reeling in the medals, winning gold in the all-around, uneven bars, and vault and silver on beam and floor at the 2014 WOGA Classic. But the sailing wouldn’t be so smooth going forward. 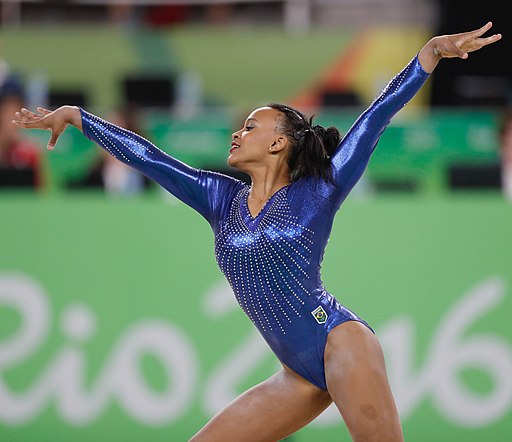 Finances were not the only thing that seemed to be conspiring against Rebeca Andrade. Starting in 2015, she suffered not one, not two, butthree ACL tears which routinely derailed her progress.

Her third injury took place in June 2019 as she was competing at the Brazilian Championships. The ACL tear prevented her from entering the 2019 World Championships, which dealt a great blow to her team.

But Andrade didn’t give up. At this point, she knew exactly what to expect when rehabbing her knee, and was determined to return to peak form. Unfortunately, just as she set to compete for the first time since her injury, COVID-19 reared its ugly head, the competition was called off.

Still, Rebeca Andrade stayed positive. When the world shut down, she got back to work, using the extra year to perfect her craft.

Bringing it home for Brazil

All Andrade’s hard work earned her a spot in the Tokyo 2020 Olympics. It was in Tokyo that she debuted the Cheng, and what a debut it was. While most gymnasts struggle to squeeze in all the twists, Andrade seemed to have all the time in the world. This was an absolute game-changer for her, as she edged out MyKayla Skinner of the U.S. to earn the gold in vault.

Rebeca took on the uneven bars with the hope of snatching a second gold, but made a costly mistake early on in her routine. While the average athlete might have been shaken, Rebeca Andrade kept her composure and earned herself an impressive silver medal.

Rebeca achieved her dream - and then some

Seemingly overnight, Rebeca’s popularity exploded. She became one of the most followed gymnasts on social media, boasting 2.4 million followers on Instagram alone. She even made the cover of Brazilian Vogue in October 2021.

“Many people didn’t believe in me when I got injured. Today, I’m here to show the world that everything is possible if you chase what you really want,” said Andrade. She certainly has shown the world what perseverance can accomplish - and has far surpassed the goals she set out to achieve.