Nastia Liukin is a former American artistic gymnast who was the 2008 Olympic all-around champion. She is tied with Shannon Miller and Simone Biles for winning the most medals in a single Olympic Games.

Known for her ethereal grace and mesmerizingly long lines, Nastia took the gymnastics world by storm in her short but spectacular athletic career.

Nastia Liukin was born as Anastasia Valeryevna Liukina on October 30th, 1989 in Moscow. Her parents were both decorated gymnasts themselves. Nastia’s mother, Anna Kotchneva, was the 1987 World Champion in rhythmic gymnastics, and her father, Valeri Liukin, won two gold and two silver medals for the Soviet Union at the 1988 Seoul Olympics.

When the Soviet Union was dissolved in 1991, Valeri moved his family to the United States and set up a gymnastics academy in Plano, Texas called WOGA (World Olympic Gymnastics Academy).

As a toddler, Nastia would watch her parents training in the gym and was immediately enamored with the sport. She began training as soon as she could walk, and by the age of three was already showing great promise on the uneven bars. Her father would continue to coach her throughout her gymnastics career.

Nastia Liukin quickly moved up in the ranks as she continued her gymnastics training. Her effortless grace and balletic style made her a joy to watch, and she was bold with her difficult tricks as well. During her career, Nastia Liukin performed a front aerial to Arabesque on beam, a double front on floor, and an Ono-half on the uneven bars.

Nastia first represented the U.S. at the Junior Pan American Championships in 2002, where she helped her team to win the gold. She also earned three silver medals in the individual competition: one each for balance beam, uneven bars, and all-around.

The next year, she emerged victorious at the U.S. National Championships, walking away with gold medals in balance beam, uneven bars, and floor exercise.

By 2004, Nastia was competing neck-and-neck with the U.S. Olympic athletes, and the only thing holding her back from the 2004 Olympics was her age.

In 2005 Nastia Liukin won her first senior national title and became the World Champion on both balance beam and uneven bars. She also earned a silver medal on floor exercise and all-around - where she missed the gold by only 0.001 point.

Nastia’s winning streak continued until she sprained her ankle just before the 2006 World Championships. She still competed on the uneven bars despite her injury, earning her team the silver medal.

With nine World Championships medals, seven of which were individual, Nastia was tied with Shannon Miller as having the third-most World Championship medals among U.S. gymnasts. This time around, the Olympics were well within her grasp. 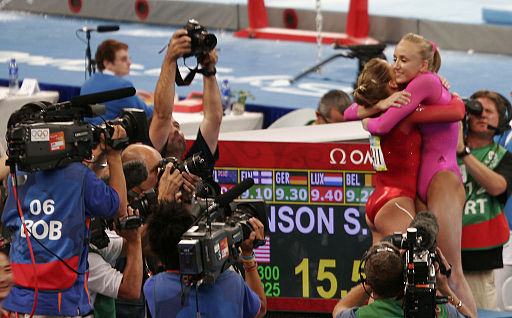 A short but stunning run

At the 2008 Beijing Olympics, Nastia won five medals: gold in the all-around, silvers on beam and bars, and bronze on floor. This tied her for the most medals won in a single Games by an American gymnast.

She took a break from gymnastics for a few years to focus on other areas of her life and recover from her previous injuries. This seemed like the best course of action to her at the time, but perhaps her hiatus was too long-lived.

Nastia tried to return to her gymnastics career, when on the last night of the 2012 Olympic Trials, she fell from the bars during her Gienger release. Her scores could not recover. Having missed a spot on the Olympic team, Nastia decided to retire from the sport.

Nastia continues to work in the world of gymnastics as an NBC Sports analyst. She was inducted into the International Gymnastics Hall of Fame in 2018.